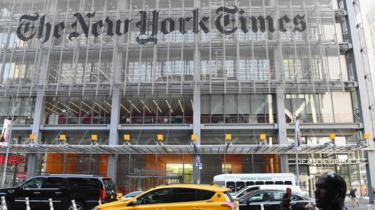 The New York Times’ opinion editor has resigned amid outrage over a piece by a Republican senator calling for military forces to be sent to cities where anti-racism protests had turned violent.

James Bennet stepped down after Senator Tom Cotton’s article “Send in the Troops” caused revolt in the newsroom.

It backed Donald Trump’s threat to use troops to quell unrest.

The newspaper had initially stood by the publication but then said the article “did not meet” its standards.

The change in position came after an outcry from both the public and staff over the piece, published on the newspaper’s website last Wednesday. Some journalists did not come into work on Thursday in protest.

Mr Bennet, who has been the opinion editor since 2016, later admitted that he had not read the piece before its publication. The Arkansas senator’s article called for “an overwhelming show of force” against groups he described as “rioters”.

Its publication happened as hundreds of thousands of people have been marching across the US in recent weeks against racism and police brutality. There have been violent incidents in some cities.

The demonstrations were sparked by the death of African-American George Floyd in police custody last month. Video showed him pinned to the floor, with a white police officer kneeling on his neck for almost nine minutes.

“As a black woman, as a journalist, I am deeply ashamed that we ran this,” Pulitzer Prize-winning journalist Nikole Hannah-Jones wrote on Twitter.

In a note to staff on Sunday, New York Times publisher AG Sulzberger said: “Last week we saw a significant breakdown in our editing processes, not the first we’ve experienced in recent years.”

The note said Mr Bennet had resigned after he agreed that “it would take a new team to lead the department through a time of considerable change”. There was no mention of Mr Cotton’s piece.

The New York Times initially defended the article, saying the editorial page needed to reflect diverse viewpoints. But in a lengthy editor’s note added to the text on Friday, it said the piece “fell short of our standards and should not have been published”.

It said “the editing process was rushed and flawed”, adding: “The published piece presents as facts assertions about the role of ‘cadres of left-wing radicals like antifa’; in fact, those allegations have not been substantiated and have been widely questioned.”

The newspaper also said the senator’s statement that police officers “bore the brunt” of the violence seen in some cities was an “overstatement that should have been challenged”. The headline, which had not been written by Mr Cotton, “was incendiary and should not have been used,” the note added.

Mr Sulzberger’s email announced that Jim Dao, who oversees op-eds as a deputy in the opinion section, will be moved to another role, while Katie Kingsbury will become acting opinion editorial page editor.

On Saturday, Stan Wischnowski, the top editor of the Philadelphia Inquirer, resigned after publishing a headline that equated property damage to the deaths of black people, which prompted public condemnation from many of the newspaper’s staff.

Mr Wischnowski apologised for what he described as a “horribly wrong” decision to use the headline “Buildings Matter Too” on an article about civil unrest in the US.