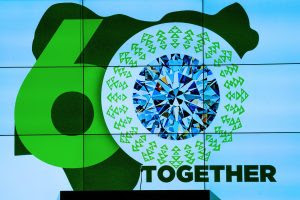 After decades of British colonial rule, Prime Minister Sir Abubakar Tafawa Balewa took on the reins of power and led independent Nigeria’s new coalition government. The celebrations lasted for weeks in some parts of the country and for those present at the Race Course (now Tafawa Balewa Square) in Obalende, Lagos, on 1 October 1960, it was an unforgettable experience.
“Just before the stroke of midnight, they switched off the lights and lowered the British Union Jack,” Ben Iruemiobe, then a bright-eyed 16-year-old student who witnessed the raising of the Nigerian flag.
“Then at midnight, the lights were switched back on and the green-white-green stood majestically for all to see. This was followed by a volley of fireworks, then the military band played and we rejoiced,”

Seven years after independence, a civil war erupted as Nigeria’s eastern region tried to form the breakaway Biafra state.
The three-year conflict, which ended with Biafran surrender, resulted in the death of more than two million people, most of them women and children who died of starvation in eastern Nigeria.
US-based novelist Okey Ndibe, a child during the war, describes it as the defining event in Nigeria’s difficult history.
“The [government’s] main goal was achieved, but at grave human and moral cost.
“The ghost of Biafra continues to haunt Nigeria. Festering violence in the north-east zone, renewed agitations for Biafra, and demands by residents of the oil-rich Niger Delta for resource control, are consequences of Nigeria’s failure to use justice as the arbiter of public policies,” he told the BBC.

In 1983 the government of Shehu Shagari ordered more than a million West African migrants, most of them Ghanaians, to leave Nigeria at short notice as the country faced an economic downturn.
The red, white and blue chequered plastic bag that the desperate departing Ghanaians used to carry their possessions became known as “Ghana Must Go”. But now they are more often seen as a symbol of sleaze in Nigeria, preferred by corrupt politicians to ferry huge amounts of cash.

After 16 years of brutal military rule, interrupted by 82 days of a civilian government in 1993, democracy returned to Nigeria in 1999. Gen Abdulsalam Abubakar transferred power to Olusegun Obasanjo, who had won nationwide elections.
The 1990s was a packed decade in Nigeria’s political history – including the annulment of an election by the military in 1993, the global condemnation of the 1995 hanging of nine environmental activists, among them Ken Saro-Wiwa by military ruler Gen Sani Abacha, and Abacha’s own death in 1998.
The handover to democratic rule was seen by many as a culmination of these three events. The 21 years since have seen the longest uninterrupted republic in Nigeria’s history.

On 16 November 2001, when a group of women competed for the judges’ attention at the Miss World beauty pageant in South Africa only a handful of Nigerians were aware of the event.
But by the end of the day, millions in Africa’s most populous country had become familiar with the name of 18-year-old Agbani Darego – the first black African to be crowned Miss World.
“Prior to Agbani winning it wasn’t easy to get Nigerians and Africans to participate in pageants because they didn’t see themselves winning.
“But from having 20 to 50 participants we had hundreds of thousands who wanted to participate. Now the world wants African music, they want African dance. We are black, we are beautiful and we are in demand,” Ben Murray-Bruce, a former organiser of the Most Beautiful Girl in Nigeria contest.

2010s – The abduction of the Chibok girls

In April 2014, Islamist militant group Boko Haram kidnapped 276 girls from their school in Chibok in Nigeria’s north-east, where there is still an insurgency.
Boko Haram had kidnapped many girls and women before but the abduction of the schoolgirls sparked a global campaign with the hashtag #BringBackOurGirls.
Bukky Shonibare, one of the leaders of the Bring Back Our Girls Group in Nigeria that protested relentlessly for government intervention to help free the girls, says the abduction greatly affected education in northern Nigeria.
“Children – boys and girls – became scared of going to school, and parents had to make a choice of either keeping their children alive or sending them to school.
“Efforts at achieving gender equality were greatly affected. Gains recorded [previously], especially around girl-child education, were immensely affected,” she said.
After six years, more than 100 of the girls are still missing.

ENDSARS: These Protesters Slept On The Road Last Night! This Must Go Down In History (See Photos)

See how Massive the #ENDSARS Protest is Going in Benin city.