Nigerian singer Ayodeji Balogun aka Wizkid may have finally heeded the advice of some of his supporters who suggested a name change since he is no longer the young ‘Wizkid’ that stormed the scene years ago.https://www.instagram.com/_u/goldmynetv/?utm_source=ig_embed&ig_rid=4d5a4da2-4abd-464b-b8a8-d2384224b584&ig_mid=ED7C8A35-B079-4368-9A52-C3675A4EEF22

In a recent update sighted on his official Instagram page, the Grammy-nominated music star made a slight change to the official stage name in his bio section 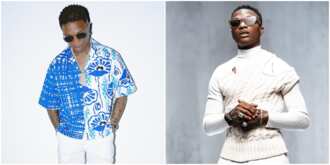 Wizkid added Big Wiz to the section. The name seems to be in line with what fans have been clamoring for as it reflects that the singer is no longer the young kid of yesterday.

Check out a screenshot of the page below:

The singer’s name change has already gotten his fans in the online community talking. Read what some of them had to say below:

“Nigeria to UAR, Wizkid to Big Wiz next one is Burna Boy to Burna Man!”
jumpman_alpacino said:

“Anything he want …..it’s our starboy.”
john_asojo said:

“Expected, all those BOYS will soon turn man the likes of Fireboy etc.”
oluwapeejay said:

“So e don big b that.”
Meanwhile, Legit previously reported that the Grammy winning singer reacted to the Twitter ban in the country on his social media page.

Taking to his Instagram story, the Made in Lagos star asked if that’s how things would now operate in UAR.

Wizkid’s post went viral on social media with numerous fans sharing their opinions about the situation in the comment section.