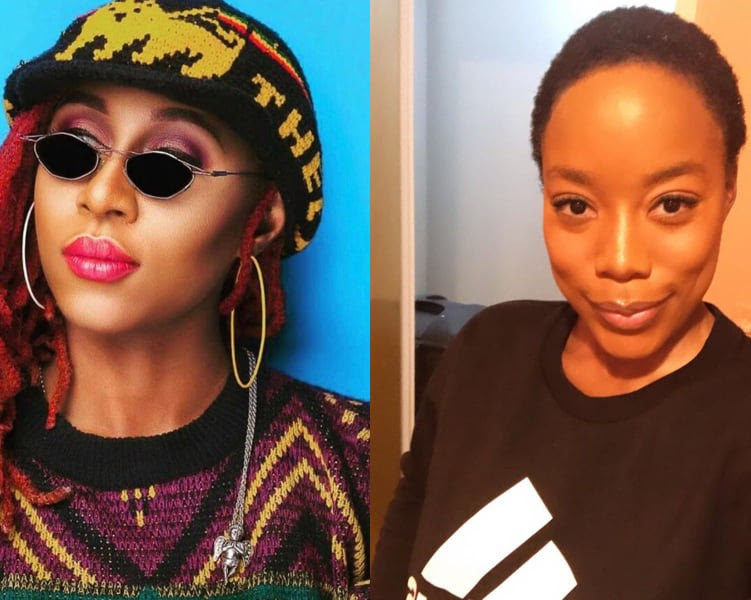 Cynthia Morgan’s former manager, Joy Tongo has gone on Twitter and Instagram to slam the dancehall musician after she granted an interview where she blamed Jude Okoye for her career woes.

In an Instagram Live chat with former Miss Globe Nigeria, Cassandra Ogbebor, Cynthia Morgan spoke about the record label issues she had after signing to Northside Entertainment, which was owned by P Square’s older brother, Jude ‘Engees’ Okoye.

Cynthia told of how she lost her stage name “Cynthia Morgan”, her VEVO account, royalties, her Instagram account and other things due to the contract she signed with the record label.

Cynthia Morgan, who now goes by the stage name Madrina, said she can no longer uses the name Cynthia Morgan for business purposes due to the contract she signed. She added that she became depressed thereafter and suffered an illness that nearly took her life. She had to relocate to Benin to get cheaper treatment.

Her revelation made her the No. 1 trending topic on Twitter NG as users trended the hashtag #BringBackCynthiaMorgan in a bid to revive Cynthia’s career.

Peter Okoye, who had a falling out with his brother Jude, also weighed in on the matter and appeared to take Cynthia’s side.

However, one person who was not on Cynthia’s side is her former boss and manager, Joy Tongo. Joy took to Twitter to accuse Cynthia of seeking sympathy with her story. She also claimed Cynthia is owing her $30,000 and owing Jude Okoye “over 40 Million”. She added that she was the one who connected Cynthia to Jude Okoye and threatened to reveal more.

She tweeted: “I am in a much better place , so this time, don’t dare me . I am ready for you.  Very very ready.

“People will do anything for clout! SMH !

“Cynthia Morgan this is 2020, we haven’t forgotten all your dirt ! Internet does not lie , emails does not lie and much more . I am coming for you ! All the dirt you did to I and Jude and others you must pay this time around . It’s over 4 years and you are still talking trash!” 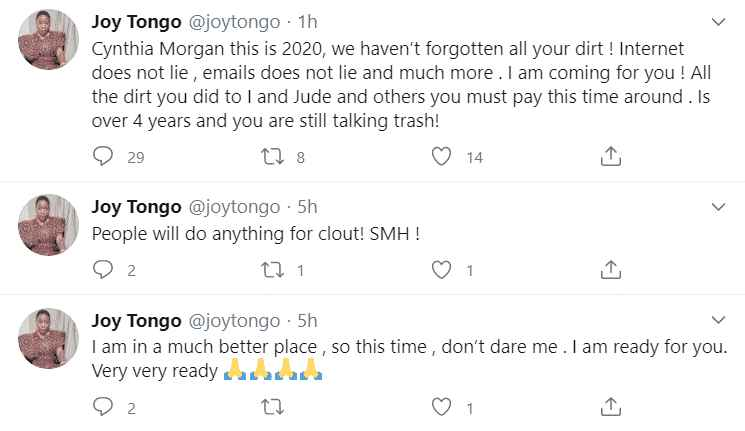 She added: “Cynthia Morgan you are adviced to let people know the truth, else we would tell them the truth . PS your former management.” 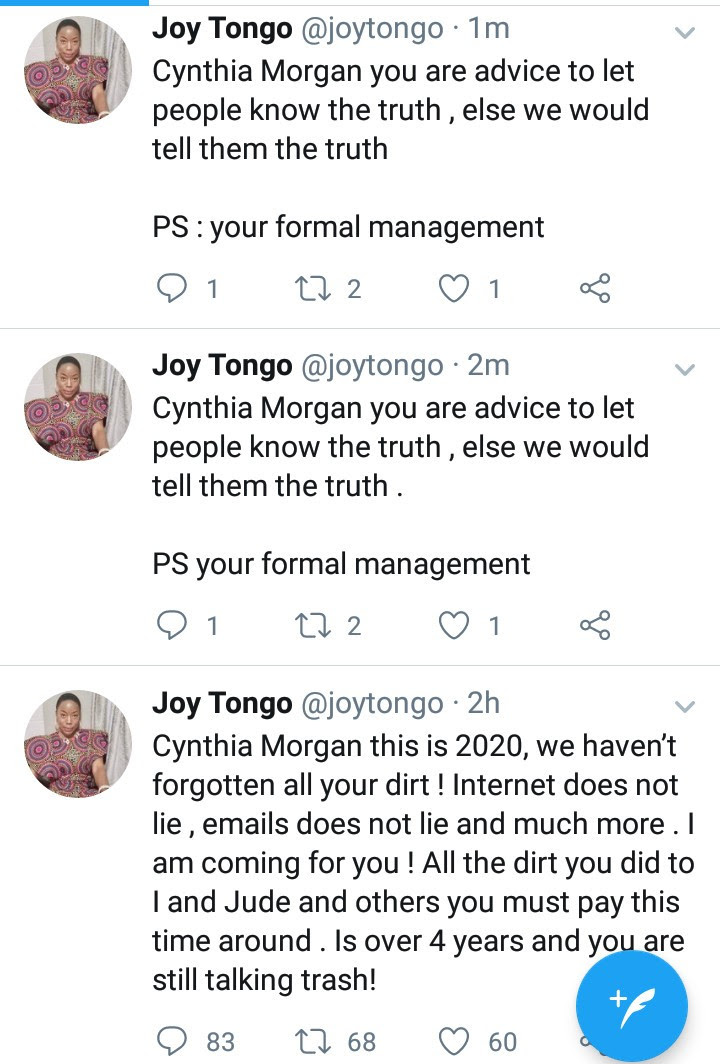 On Instagram, she wrote: “Record Label /Management are not a charity organization . As Cynthia Morgan’s formal manager from 2011-2016 who have never spoken out , I can boldly say No one killed your career. Your Pride and your nasty attitude was your downfall . You used your own hands and mouth to kill your once bubbling career. Since you can’t own up to your downfall of your music career and you are now trying to get people to have sympathy for you after 4 years , let me remind you shortly .” 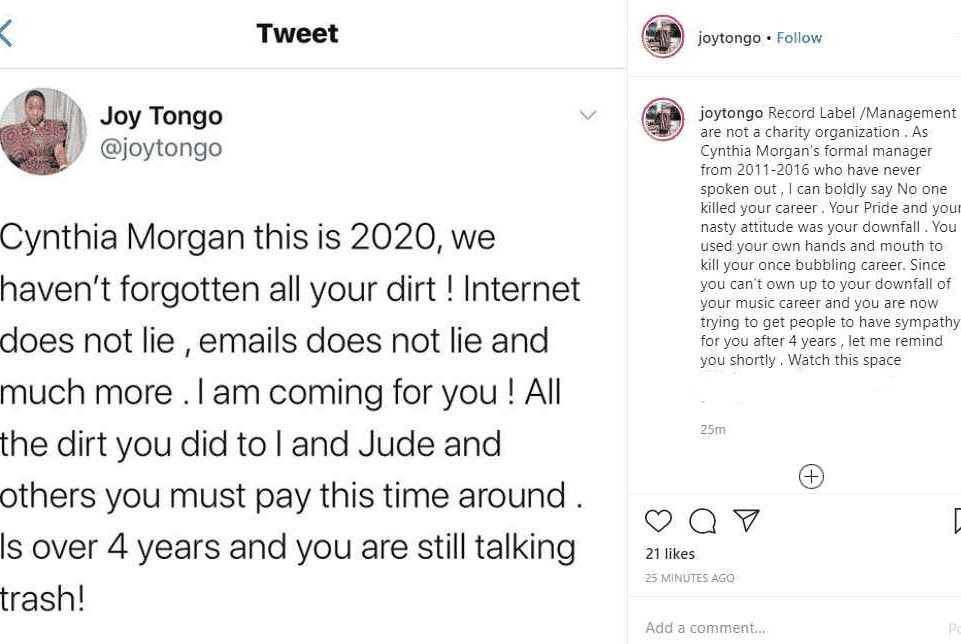 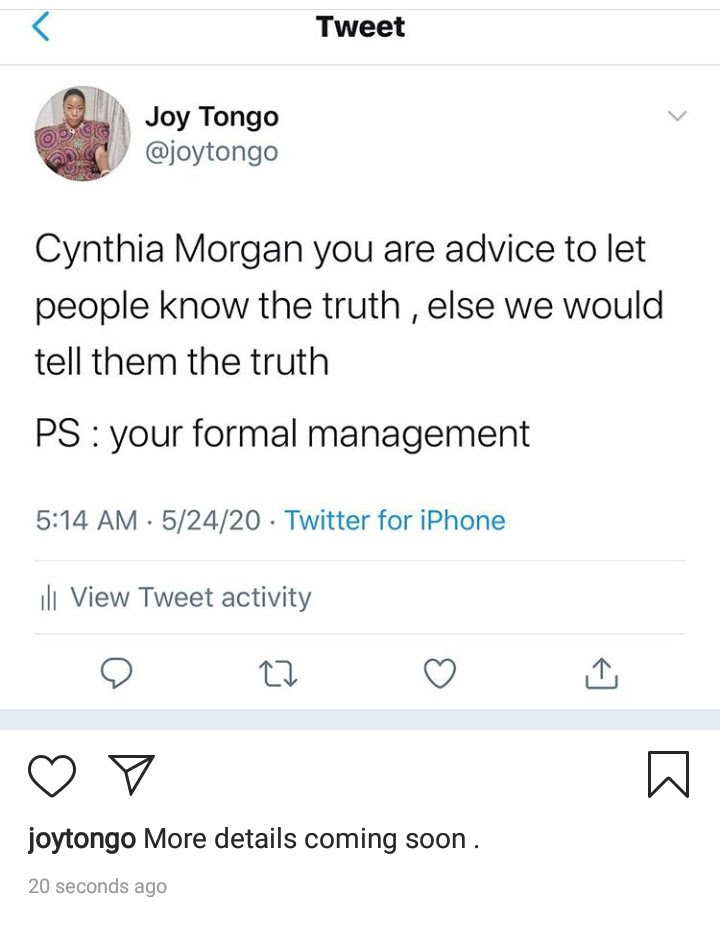 People called Joy out and accused her of hitting a woman while she’s down.

Joy then took to Twitter to share a screenshot she got from someone speaking ill of Cynthia. 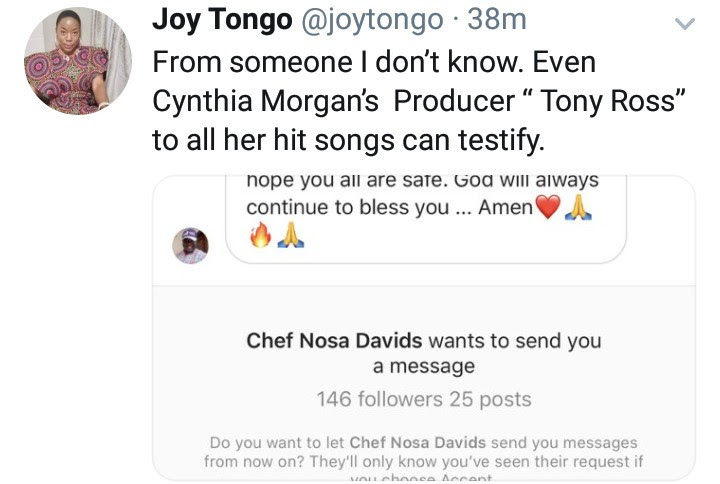 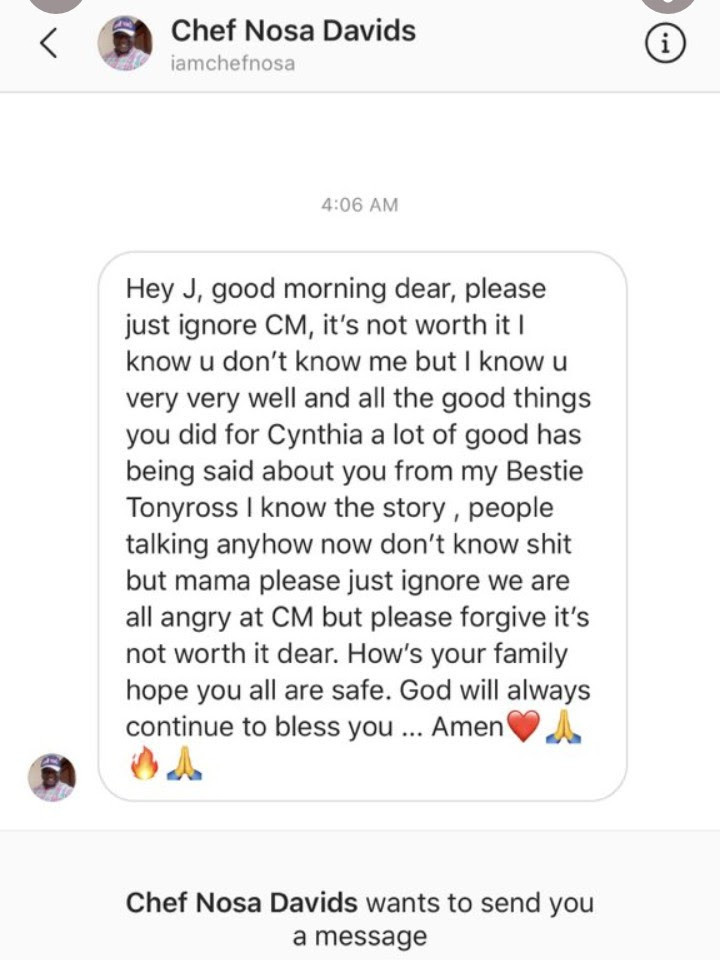 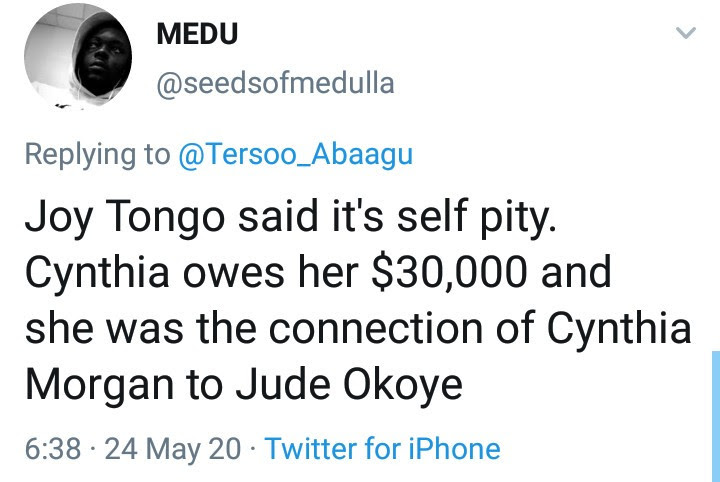 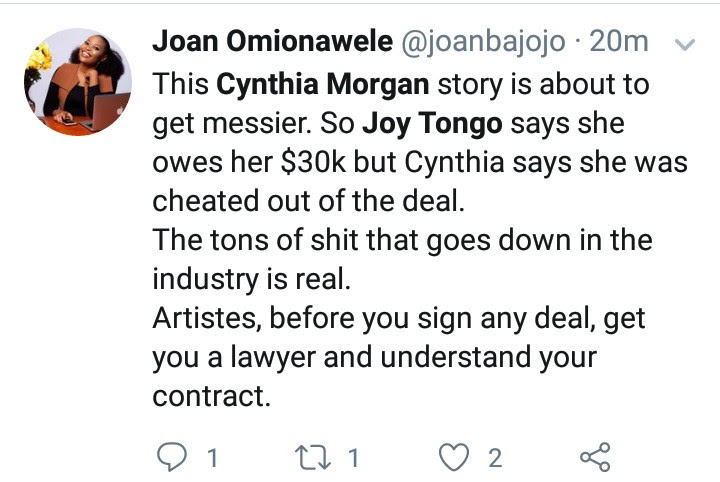