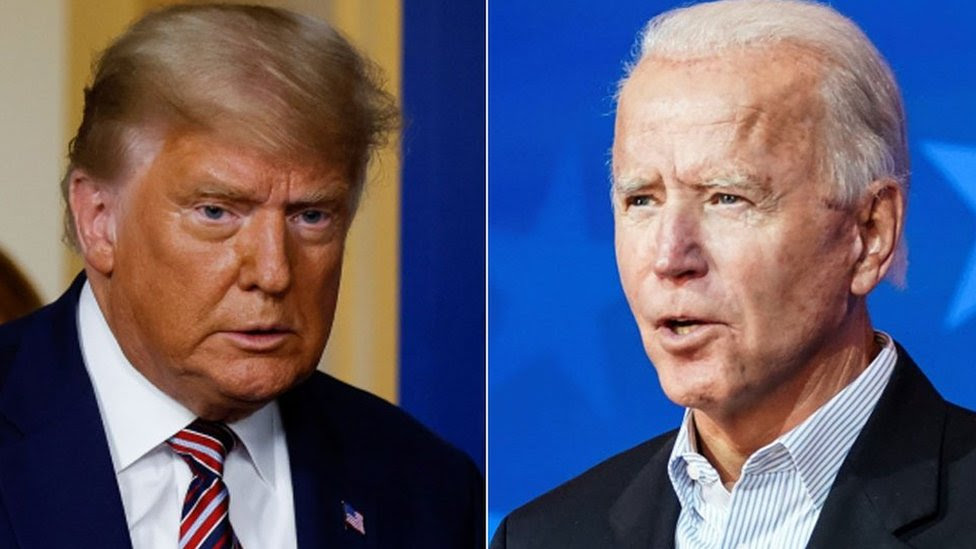 Democratic candidate Joe Biden has pulled ahead of Donald Trump in Georgia, a key state in the US presidential race, voting data shows.

Mr Trump must win Georgia to leave him with a path to win.

According to the most recent data, Mr Biden is leading in the state by 917, with most votes now counted.

With its 16 electoral votes, winning the state would put Mr Biden just one shy of the crucial 270 threshold needed to win the presidency.

If Mr Trump does not win Georgia, the most electoral college votes he could possibly get is 269, which would leave the candidates in an unprecedented draw.

No news organisation has yet projected the state as a Biden win. Authorities in the state have said they hope to have a result on Friday.

The result of Tuesday’s election hangs in the balance, with counting still under way in several states.

The cliff-hanger follows one of the bitterest campaigns in living memory.

What’s the current state of the race?

Joe Biden now has 253 electoral college votes, while Republican Mr Trump has 214. To win the White House, a candidate needs 270.

In addition to Georgia, counts are continuing in four states with razor-thin margins – Pennsylvania, Arizona, Nevada and North Carolina.

A win in just Pennsylvania, which has 20 electoral college votes, or two of the other four remaining states would be enough to confirm Mr Biden as president-elect, barring any legal challenge.

What have the candidates said?

Mr Trump has made unsubstantiated claims of election fraud.

Beyond allegations of irregularities, the Trump campaign has not presented any evidence of election fraud.

The president added: “We were winning in all the key locations, by a lot actually, and then our numbers started getting miraculously whittled away in secret.”

“There’s been a lot of shenanigans and we can’t stand for that in our country,” he said.

Mr Trump actively discouraged his supporters from voting by mail, while Mr Biden urged his voters to do so, and it is these postal ballots that are now being tallied in the key states.

Election analysts also say the president’s claims of Democratic electoral corruption are undermined by the better-than-expected performance of his fellow Republicans in congressional races across the map.

Several US networks cut their feeds of Mr Trump’s speech, while numerous Republicans criticised the remarks.

In a brief televised address, Mr Biden appealed for calm across the country and again expressed confidence he would be declared the winner.

“Democracy is sometimes messy,” he said. “It sometimes requires a little patience as well.”

“The process is working. The count is being completed. And we’ll know very soon.”

As results trickle in, protests involving both sides have been held in major cities over the vote counting.

What legal action has the president taken?

Mr Trump has filed a barrage of lawsuits alleging irregularities and lack of transparency.

The president demanded a recount in Wisconsin, as is the right of any candidate who comes within 1% of his rival in total vote there.

But Mr Biden was leading by 20,000 votes in Wisconsin, and election analysts say previous recounts in the state have usually only altered the final tally by a few hundred votes.

Trump campaign lawsuits filed in Michigan and Georgia were tossed out by state courts on Thursday. In the Georgia case a judge found no evidence to support a claim that 53 late ballots had been improperly added to late ones.

But in Pennsylvania, the Trump campaign won a legal victory when a state appeals court judge said Republican poll-watchers must be permitted a closer look at ballot processing.

The Republican party in Nevada said it had sent a report to the US Department of Justice on what it alleged were “at least 3,062 instances of voter fraud”.

The party tweeted that thousands of individuals had been identified violating the law by casting ballots after moving out of the state.